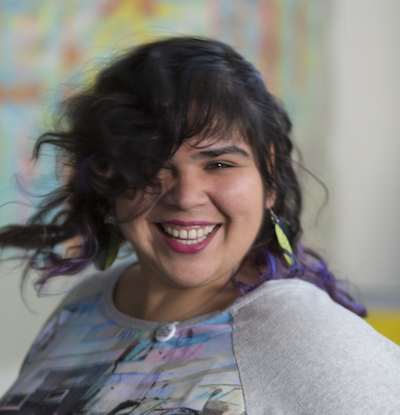 Diana Nucera, Director of the Detroit Community Technology Project, has traveled as far as Brazil and stayed as close as a mile to her home, teaching people how to build low-cost, small-scale, high-speed wireless Internet networks. An autodidact who DJs under the moniker, “Mother Cyborg,” Nucera sometimes incorporates a disco soundtrack into her popular education curriculum.

“I look at technology as a way to bring people together and have fun,” she said. “I believe that community technology can strengthen relationships so that people are connected to each other and the planet.”

As a queer teenager growing up in rural Indiana during the 1990s, Nucera was the only girl and person of color in her elective circuit-bending classes. She loved science, but the environment of those classrooms felt so hostile to her, Nucera recalled, that she ended up pursuing photography instead.

“That’s where all the women were,” she said, laughing.

For years, Nucera struggled to find ways to pursue her interests in technology.

“There were no outlets to explore things I was interested in,” she recalled. “I was constantly in classes that did not cater to my learning style. Being an artist who is also a scientist… There was not a space for those worlds to exist together.”

So, even as she attended art schools in San Francisco and Chicago, Nucera turned her attention to demystifying media-making technologies for communities that are historically excluded from the sciences. Nucera became a Teaching Artist for Street Level Youth Media, a Chicago-based organization that offers free courses in video, audio and music production and other media arts to young people.

“I learned about alternative education and how storytelling plays such a huge role in learning as well as building relationships,” Nucera said. “I think my Master’s degree was actually from Street Level, not from the Art Institute.”

Another major influence in Nucera’s political and professional development, she said, was the Allied Media Conference (AMC), a yearly gathering since 1999 of “people using media to incite change.” Nucera had been attending the AMC (originally dubbed the Midwest Zine Fest) since she was 17 years old. There, she was introduced to a Do-It-Yourself subculture of writers, filmmakers, radio producers, technologists, youth organizers, artists and social justice activists.

“The AMC changed my life,” she said, recalling her first impression of the gathering. “I was like, ‘Oh my God. I can choose my own adventure.’ I’m now on my eleventh year.”

Since then, Nucera became a core organizer of the conference, and many of her contributions have become mainstays of its programming. In 2007, she coordinated the AMC’s first “Media Lab,” which she described as “a potluck of technology.” Participants taught and learned audio recording and production techniques. They built a radio transmitter together. The Media Labs encouraged non-techies and techies alike to share skills, rather than be “super careful” around expensive equipment, Nucera said. Eventually, the labs evolved into “DiscoTech” (“Discovering Technology”) community fairs, where several generations of community members in an area could converse about their priorities in accessing technology, as well as gain practical expertise using digital tools like smart phones, video equipment and privacy settings in Google searches.

“Our question was: ‘What is the role of media and technology in building an economy that is based in mutual aid and relationships?’” Nucera said. “We went and taught people stuff, did surveys, and took everything we learned in the DiscoTechs and AMC Media Labs and made them into a longer, 20-week training in education, organizing, entrepreneurship, and digital skills.”

Digital stewards, said Nucera, are “neighborhood-rooted people that support others in learning and discovering tech. Some do workshops that allow people to build computers from recycled parts. Instead of everyone going to the Apple store to get their stuff fixed, they can go to the steward first.”

The Digital Stewards model has been successful in bringing greater awareness to the ongoing digital divide. Detroit has the worst rate of Internet access of any big US city, with four in 10 residents lacking broadband, according to the Federal Communications Commission — and many other cities are not much better off. The program has also publicized the promise of community wireless networks, offering less expensive and more decentralized Internet service to low-income communities and areas vulnerable to natural disasters like floods.

To date, in Detroit, 36 Digital Stewards have been trained in 6 neighborhoods, and the model and curriculum Nucera helped develop has been used around the world at 11 project sites in 10 countries.

“I did video calls every other month to support them and troubleshoot any problem they might have run into in the organizing or teaching phases,” said Nucera of her far-flung colleagues.

Over the years Nucera observed patterns in the implementation of technology projects that aim to be relevant to communities; patterns that should be changed. “Often times technologists parachute into communities, building tech for or with communities but not necessarily offering the necessary tech skills needed to evolve or maintain that tech. These projects are often dependant on those technologists or people with specific skills, missing the opportunity to build capacity within communities. The Digital Stewards model takes the opposite approach,” Nucera said.

“The training heavily emphasizes community organizing and mapping,” she said. “Stewards think about how a network can support its community. They learn facilitation skills, to survey, to have community meetings to understand what people use the Internet for. They build a network together that hopefully meets those needs. There’s a cohort of stewards that facilitate use and maintain it.”

“Narrow definitions of ‘technologist’ also limit what projects get support and can alienate or invisibilize community members,” Nucera added.

“People think of technologists as computer science majors or coders, and when people think about technology programs they think about coding programs,” she said. “In our first digital stewards class, we had a group of folks whose ages ranged from 20 to 78. The elders that were in their late 70s had worked on Morse code, built telephone systems, were engineers in the military and did not identify as technologists. I thought that was fascinating.”

“Young people who were born into a technologically-connected world should also be respected and trained as experts of technology, not just consumers or beta testers,” Nucera said.