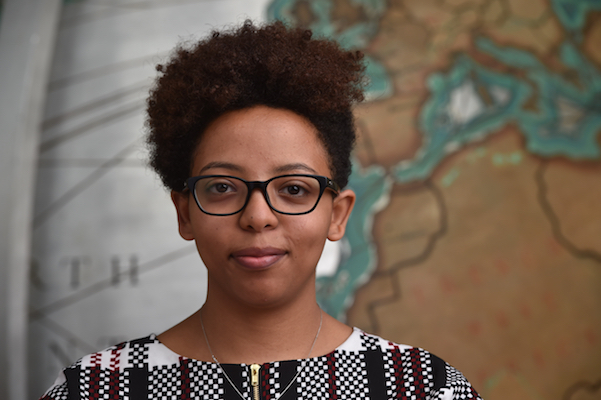 What are the technologies that intervene in war?

Former Ford-Mozilla Open Web Fellow, Berhan Taye, grew up in Addis Ababa, Ethiopia. After studying International Relations in Sweden, Berhan’s passion for political transformation and restorative justice led her, in 2012, to a job as a communications assistant for CEWARN, a nonprofit working to mediate conflicts in East Africa. The organization relied heavily on a custom-made software tool that enabled it to track, categorize and analyze large volumes of data from seven states to predict and prevent violence. The indicator data that it monitored included the weather, livestock raids, deaths, and the movements of security forces in the region.

“We would get alerts mostly between the border crossings,” Berhan recalled. “You put in a lot of indicators, and it tells you if a certain area is in the red zone, or yellow zone, depending on what has happened in the past four weeks in that area. And it lets you know if conflict is about to erupt in a certain area.”

The tool would also list response options and recommend solutions.

One alert from 2011 stated: “The Local Peace Committees have been able to capture the perpetrators and recover the stolen animals in most cases. However, there is a need to conduct a local level consultation among these groups with the objective of pre-empting escalation of conflict associated with the onset of the rainy seasons.”

The software tool used incident reports to highlight hotspots and incident areas, allowing responders to act quickly — and CEWARN’s approach to conflict de-escalation was community-based: The group preferred to deploy local peace committees, comprised of elder women and youth, rather than military. Despite this, the killings mounted, and for two years, Berhan sat with perpetrators of war from every side.

“What they talked and cared about was not people,” she remembered. “They talked about their gains, interests, and who has more control, territory, weapons.”

“I felt like I was losing myself,” Berhan said. “There wasn’t a lot of change.”

She decided to return to school, this time for a Master’s degree in Peace Studies at the University of Notre Dame in Indiana.

Berhan’s path to activism began at age sixteen, when a man groped her on her walk home from school. She chased him off, and shortly afterward, she began volunteering at the local women’s affairs office, where survivors of partner abuse went to testify.

“I was the note taker,” Berhan recalled. “Every day you sit there and just listen to people’s grievances. And they go back to their husbands. Some were eventually killed by their intimate partners. So just experiencing that, dealing with that every day, I was like, ‘Okay, that’s the reality of the world.’”

Later, Berhan spent time working on land rights issues in South Africa. She remembers walking through the streets of Cape Town, where “Blackness had been moved to the margins.”

“When you walk on the streets, you see the statues of a racist guy that stole people’s land, another guy that killed hundreds of people,” she recalled. “The struggle for land is really trying to understand how injustice has messed us up for so many generations. How can we move forward from the trauma that we’ve all experienced?

Today, Berhan is based in Addis Ababa, Ethiopia. Her current research on “technology for social justice” examines the work of activists who, like herself, fight for access to information and freedom of expression, but whose backgrounds may be far afield from computer science. Berhan’s definition of “technology” is expansive and inclusive.

“There’s this assumption that technology is a computer,” she said. “To me, a vaccination is technology. Our ancestors created technology: herbal medicines. In my mother’s or my father’s village, it might be water coming out of the pipes. I would ask, ‘What is your technology? What’s technology in your context?’”

“And, of course, sometimes technology is not the answer,” she added. “Maybe the issue we are addressing is not about technology.”

In Ethiopia, the government runs the only Internet service provider. Fewer than three percent of the populace have online access. In the past year, the government has shut down Internet access several times in response to anti-statist protests that were organized online. Amnesty International and the Open Observatory Network Interference reported that the Ethiopian government censored and blocked news outlets, websites critical of its policies, and privacy software tools like Tor. Encryption tools, like Signal, are illegal.

In this context, Berhan said, outsiders who preach to Ethiopian activists “net neutrality” or software-minded solutions can seem irrelevant, or even do harm. She recalled an incident when tech activists from abroad hosted a digital security workshop for Ethiopian bloggers. The bloggers were later arrested and charged with, among other things, using an encryption tool suggested by the workshop facilitators.

“You have mostly white men that don’t understand what the digital security issues are,” Berhan said. “What people don’t understand is that I might be able to encrypt my email — but when you’re being tortured and asked for your passphrase, you’re gonna hand out that passphrase so quickly… Again, what is the technology that will work in my context? The government has every back door that they want. I think other people that come from other communities or countries might have the best intentions to help, but really fail.”

These days, the continent’s number of homegrown technologists is growing. Kenya has been nicknamed the “silicon savannah.” Currently, some 300 civic tech hubs in Africa work with community groups and on government initiatives.

“Those are the hubs for technology innovation, and maker spaces,” Berhan said. “But the focus is on innovation — for profit, rather than tackling social problems. It’s like, what is the next Uber idea? That’s what is being sought in the continent. For me, that has been really very depressing. What we’re trying to adopt is the African version of Code for America, which is really great but doesn’t really engage in political issues. Code for America is very neutral in this time of injustice.”

On the continent and elsewhere, Berhan said, funders for tech projects tend to fall into the same pitfalls common as in the development sector. Funders and project initiators from abroad often fail to recognize community structures that already exist in locations where they plan projects, and rarely do they put social justice interests first.

The attitude, she said, is often: “’Yes, let’s create something here. We appoint you as the leader of this thing. You’re gonna solve this. We’re gonna pump so much money into this. And within three years, this problem will be solved’ — which often is a lie. You go there, take their stories, exhaust the people, and then go to another. For me, it’s like, what do people have? Is this really the right tool that you want? Because giving computers to school kids is good. But if they don’t have electricity to charge their laptops with, you haven’t done much.”

“I don’t care much about creating technology just for the sake of creating technology ,” Berhan explained. “I want to see what can work in my context. If you can make my commuting easy, my trading easy for me as a farmer in a remote area, that’s great. Do that. But let’s focus, also, on the social justice part of tech.”