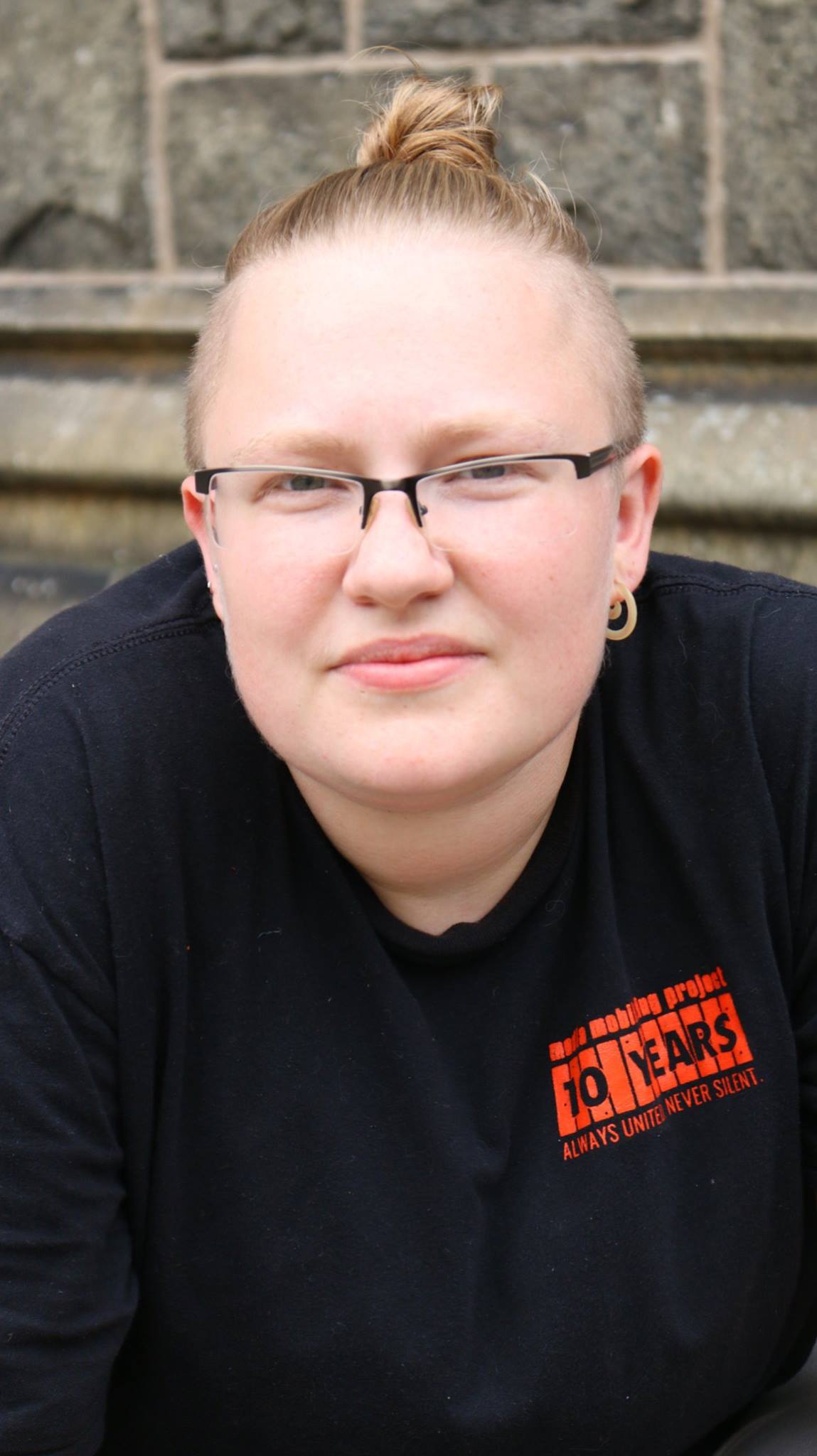 On any given day at the office of the Media Mobilizing Project (MMP) in Philadelphia, some dozen young filmmakers and activists taking a several-month course in video production “making media that serves movements” may be found hunched over shared computers, editing videos about local criminal justice reform, immigrant and labor rights. Community members might drop by for trainings on how to livestream meetings to defend public schools, or to make plans for running an emerging media production co-op. In the thick of the activity, Helyx Chase Scearce Horwitz, independent video artist as well as MMP’s Tech Manager, is likely coordinating equipment for loan between different groups of people, detangling wires, fixing a malfunctioning printer, uploading footage from SD cards to the office servers, charging batteries, and maintaining the organization’s open-source database.

“When stuff goes wrong with media management and files are disconnected, or people can’t find things if they’re trying to set something up, I get called in,” Helyx said.

Technical troubleshooting is familiar to Helyx, who, at age fourteen, learned to code in C++ at a public high school in Upper Darby, outside Philadelphia.

Helyx paused. “I don’t like coding. But I understood it enough that I was able to do really well in this class.”

What Helyx really loved was film. At the age of nine they were drawn to their parents’ video camera. It was old enough that it only worked when plugged into a wall outlet. By eighth grade, Helyx was able to buy a new camera. Inspired by Michael Moore at the time, they filmed “everything.” 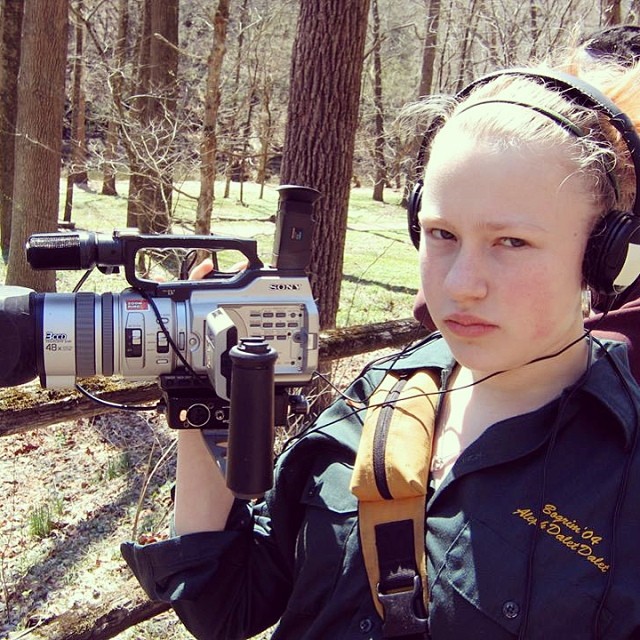 “My dad showed me ‘Bowling for Columbine,’” Helyx recalled. “That was the first time I saw a documentary and was like: ‘Oh this can be like funny and interesting.’ Up until then, documentaries were boring, so this changed the framing about what a documentary can be and how interesting that kind of story could be.”

In high school, Helyx badly wanted to study at a summer film course offered by the New York Film Academy, but they weren’t able to afford it. Luckily, their dad heard about the Documentary History Project for Youth, a summer program run by the Scribe Video Center in Philadelphia — “a video center deeply rooted in Black filmmaking in Philadelphia,” Helyx described.

Not only was the program free, it even provided stipends for the ten youth accepted each year. By the end of the summer, Helyx had learned new skills in filmmaking and had also saved enough money to buy a computer on which they could edit video.

“But,” they added, “I started just figuring it out.”

In the following years, Helyx dabbled in broadcast journalism classes offered at their high school, developing a knack for live video production and technical direction. They went on to Hampshire College, where they continued to pursue video arts and dabble in computer science. Helyx moved into installation work, creating story booths that combined both analog and digital media.

“What I’m really interested in is systems and thinking about systems,” they added. “I have a mind for understanding how different components might interact with each other, but very little interest in the details of the code that needs to go into one component of a system.”

After college, Helyx moved to Philadelphia and worked a graveyard shift production assistant job at a local NBC affiliate, then moonlighted as a wedding videographer while working part-time, coordinating video equipment rentals at Scribe Video Center, where they had learned video production. Helyx recorded video oral histories and managed media for the Transgender Oral History Project, and they volunteered at Media Mobilizing Project as an editor. Eventually, Helyx was hired by MMP for a hybrid position of media production and technical support.

“I learn on the job as things are broken,” they explained. “The printer breaks and nobody can get anything done until I repair the printers. I started at MMP with moderate technical experience, and because I have had these computer science classes and other things, I’ve always been able to do things like navigate and troubleshoot software with an understanding of what is probably going on in the back end.”

At MMP, Helyx was charged with repairing and maintaining the systems of a small media production house. Sometimes, Helyx said, they felt isolated.

“I’ve really been trying to build my tech skills,” they said. “That’s actually been really hard. If you’re not somebody who can watch YouTube videos and just pick that stuff up, it’s even more challenging. There are things like Code Boot Camps, which are great if you can afford them. But they don’t focus on the systems stuff, and I’d run into the same blocks I ran into in high school

Ultimately, what has helped Helyx most is a one-on-one mentorship, provided by Oakland, California-based information systems capacity-builder, Lisa Jervis. Lisa would meet with Helyx regularly over Skype, providing coaching in database management — an undertaking Helyx was asked to take on at MMP.

“We regularly met for a year, and started with me knowing very little about databases,” Helyx recalled. “She was able to take me through thinking about data like: ‘Okay, this is a system. This is about how we organize our people and think about the ways that different people interact with each other.’ And when you think about it like that, it’s really easy to see why we need a database where we can dynamically see somebody’s employment and then click on that and see who else works at that same place. Or we can track all the people who came to an event, and we can look at both the event and see who came to it, and we can look at an individual and see a list of what events they came to.”

“I’d done this kind of research before, but without having somebody who has the expertise to tell me, ‘That‘s great that you read that article, but here’s where you should really be focusing…’ And by somebody who deeply understands both the work and needs of social justice organizations.

It wasn’t a contract consultant relationship where we said: ‘You do the needs and assessment; you tell us what database you need, and you teach us how to implement it.’ It was Lisa teaching me how to do a needs assessment, how to assess contractors who were going to build the database, and how to assess the different databases. But I was the one who was doing that work.”

Today, Helyx regularly applies those skills when confronted with new technical administrative challenges, such as coming up with ways to archive MMP’s extensive collection of digital recordings made during the last decade. To some, the kind of nuts-and-bolts technical management work Helyx does is not “flashy,” so as important as it may be to MMP’s organizing mission to train leaders for social justice movements, it rarely receives funding.

“You need a office administrator who can cut checks, balance books and make sure there’s paper ordered,” Helyx said. “In the tech realm, you need somebody who’s going to make sure that the computers get maintained and stuff like that. I think that one of the biggest problems is that there’s funding for starting projects, but the funding to maintain that doesn’t exist. People are like: ‘I want to give my money to something really exciting.’ That ongoing maintenance work is boring, but it’s crucial.”