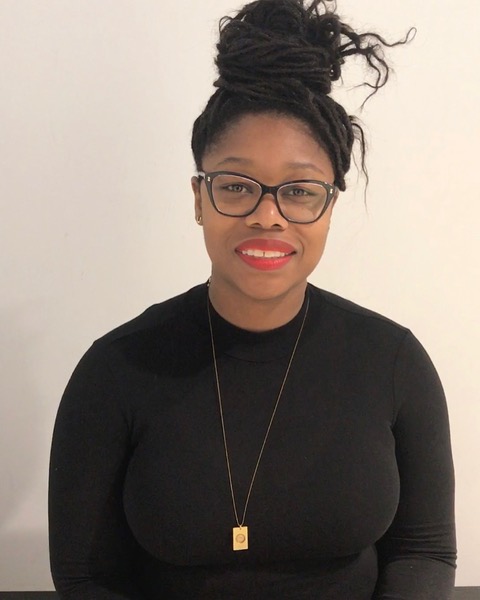 Educator and Chicago native, Kenyatta Forbes, is in the business of encouraging people to think. She’s taught coding fundamentals to fourth graders via programmable robots, used iPads to customize Special Ed instruction in a public school classroom, and created a card game that forces players to talk about race and Blackness. She has long found creative ways to use technological tools for teaching and community organizing.

Kenyatta came into education “by happenstance,” she said. After studying video and animation in college, Kenyatta taught a clay animation class for kids.

“I was like, ‘Whoa. I kind of like working with younger students.’ Didn’t expect that,” she recalled.

“Then the iPads came and changed everything,” Kenyatta said.

The iPads were part of a State Board of Education grant awarded to two teachers at Kenyatta’s school. The recipients had proposed a short-term project for which the iPads would be used. The project, Kenyatta recalled, was “not as interactive or as engaging as one would have hoped it would be.” Then, it ended.

“No other teachers wanted to use the iPads,” Kenyatta remembered. “They were like, ‘I’m good on that. I already have enough to do here.’ And I was like, ‘Let me have them!’”

Kenyatta immediately found ways to use the iPads. She distributed them out to her students, uploaded with individualized questions and worksheets tailored for each one. After reading a lesson together as a class, each student could work on the skills specific to their needs.

“I think that one of the biggest challenges for a Special Ed, or a diverse learner, teacher, is that you can’t clone yourself,” she said. “A lot of the kids are at different levels, which requires you to have different content ready for them. So, it was just a really great way for me to be able to clone myself, and have individual content set up on an iPad for students. They can go work independently at their level while I’m working with other kids.”

Soon, Kenyatta was working as Technology Coordinator and Digital Media Teacher at the school. Her duties shifted.

“It became trying to help other teachers along their iPad journey,” she said. “You have a certain sect of teachers who are like, ‘I’ve been doing it this way since before Moses,’ and I get that. But it’s also really dangerous to say, ‘This is the way we’ve always done it’ — especially when you’re competing with a digital native. I look at my niece who’s three, and she can operate a smartphone and an iPad with ease.

You have to shift along with what’s happening currently. When I was talking to teachers about this, I was saying, ‘Think about Disney movies. Mickey Mouse back in the 1960s, black-and-white, and then you fast-forward to now. Disney had to shift, and as educators, we also have to shift. It’s not that what you’re doing is wrong or not as good, it’s just taking that content and bringing it to what students are used to engaging with now.’”

As technologies continued to change, Kenyatta and her colleagues faced new challenges. One day, the state of Illinois announced that going forward, a test that had formerly been on paper would be administered online instead. Suddenly, Kenyatta remembered, kindergarteners had to master the motor skill of clicking a mouse — and it was her job to teach them. Another time, students who couldn’t yet read had to learn what email was.

“Oh, this is going to be an interesting challenge,” Kenyatta remembered thinking. “It’s an abstract concept. Think about it: an email to them flies through the air.”

Kenyatta did some research and found an app that she installed on all of the iPads in the classroom.

“The kids drew pictures and emailed themselves, so they could understand that an email is kind of an electronic thing that goes from one point to the other point,” she said. “So, we have a little picture. And if they wanted to send it to Adam, they would click Adam’s face.”

The tech curriculum that Kenyatta developed was “very grade by grade,” she said. For the fourth and fifth graders, Kenyatta devised ways to “sneak in 21st century skills” by bringing in Sphero balls — robotic balls controlled by simple codes written in an app.

Sometimes, Kenyatta and her students would learn together.

“I have no problem fumbling through something with a kid,” Kenyatta said. “I’m always like, ‘Oh, how did you do that? Can you show me?’ That’s not a comfortable place for some educators; they want to be the authoritative person in the space. I’m just like, ‘We’re all learning. I want to be a life-long learner, so let’s figure this out together.’ It’s very different.”

These days, Kenyatta is Community Manager for Hive Chicago, a youth educational organization under the non-profit Mozilla Foundation. It creates and supports programming and professional development opportunities for youth, often outside of schools. Kenyatta connects Hive Chicago’s eighty member organizations with techies, parents, educators and other Chicago residents to identify and address common problems that youth face.

One of Hive Chicago’s most well-known innovations is an app, Ride W/Me, that allows young people riding public transit in the city to find and accompany each other. The app was developed in a partnership between students, teachers, developers and designers affiliated with Hive Chicago.

Hive Chicago convenes community-wide meetings, trainings for educators, Hackathons and other events. Recently, Kenyatta said, Hive Chicago has been talking about the impact of the repeal of DACA on young people in the city, and net neutrality.

At Hive Chicago, Kenyatta is often the person who introduces people and ideas.

“A lot of my work is behind the scenes, and it’s about elevating other people’s work,” Kenyatta said. “I often get that email like, ‘Hey, I’m trying to learn about the little Chromebooks.’ Or, ‘Do you know anybody who’s doing a fashion program?’ A lot of my job is knowing what organizations are up to, and then also knowing what organizations need. So, I will periodically do a needs assessment within the network, and that also helps figuring out what kind of professional development we want to run, as well.”

Using and understanding technology has been central in much of Kenyatta’s work. But, she noted, technology “is only a medium.”

“Technology is the vehicle to empowerment,” Kenyatta said. “It’s access to information. What I do doesn’t center around technology. I would consider myself more of a community organizer than a technologist.”

“The objective of the game is that people out-Black each other,” she explained. “If you were to put down Nelson Mandela, I’d look at my hand and try to out-Black you. I may put down Malcolm X. And then, we have to have a conversation about who we think is Blackest, and why. It’s a way to talk about the construct of race, and how people identify it, or what kind of biases or construct they’ve come up with, in a non-confrontational way.”

Trading Races has been featured on VICE News, NPR and used to teach university-level Sociology classes. Part of the inspiration for the game, Kenyatta said, was an trip she took at age twenty-four to Germany.

“I remember being floored at how successfully they’ve dealt with the Holocaust, and thinking in my head, ‘How different would America be if they had dealt with slavery in the same way?’” she recalled.

“It was the first time that I didn’t feel the color of my skin was at the forefront of my interactions with people. I was there for about six months, and it was interesting being there for the first month, because I had to unlearn institutional racism. I would go into a store — and in the States, when I’m going into the store, I’m going to be followed. There, I would walk in. They would be like, ‘Hello,’ and they would go into the back room. And I was like, ‘Wait, you’re not doing what you’re supposed to be doing, which is watching me so I can shop.’ Now I feel uncomfortable. Do I leave? If I leave right now, will she think I stole something? It’s too much. And then it’s like, ‘Ken, just buy the shirt.’ So, it was great having to unlearn that, but then devastating having to fly back and relearn it all over again.”